Posted on 30 June 2020 in Industry Insight by Jill Kent

Despite the 2020 pandemic, travel and tourism remains one of the fastest growing sectors in the world. It’s also one of the most congested. Due to the rise of low-cost airlines, ecotourism, and online etailers such as Tripadvisor and Expedia, the options are endless, and competition is fierce. You need to do something pretty special to stand out.

This is where travel PR comes in. Whether you run a tour operator, travel agency, cruise line or other travel-related business, glowing coverage in a national newspaper, industry magazine, or on the blog of a high-profile traveller can set you apart, get eyeballs on your brand and send bookings soaring.

All you need is a genius travel PR campaign.

Need some inspiration? Here are five of the best travel industry PR campaigns. This one dates back to 2009, but it’s made the list as it’s still widely regarded as one of the greatest travel PR campaigns in history.

To raise the profile of the Great Barrier Reef, Tourism Queensland launched a global publicity campaign to attract more visitors. They placed a job advert in newspapers around the world, titled ‘The Best Job in the World.’ The tourist board were on the hunt for a caretaker for the stunning islands. The successful candidate would live on Hamilton Island for six months and be responsible for cleaning the pool, feeding the fish, exploring the islands, and reporting back to the world via blogs and social media.

Applicants were asked to post a one-minute video on the Queensland Tourism website explaining why they should be chosen for the job. And the response was astounding. Within six weeks, they received 34,000 applications from 200 countries.

Following an X-Factor-style whittling-down of candidates, 16 finalists were flown to the Great Barrier Reef for an interview and in May 2009, Ben Southall, a charity worker from Northampton, was appointed.

Over the six months, Ben posted around 60 blogs, 2,000 photos and 47 video diaries. He also fielded 450 media interviews and presented a six-part documentary series on the National Geographic Adventure Channel, which aired in more than 135 million homes.

Why did this PR campaign work?

The travel PR campaign exceeded all expectations as it was aspirational. Who wouldn’t want to live on a paradise island and be paid a hefty sum for the privilege?

Also, the whole thing played out online, giving it the viral factor. Within two days of the campaign going live, word had spread around the globe, generating 46,000 mainstream media stories, 230,000 mentions in blogs and vlogs, and a BBC documentary. Add to that the 34,000 video applications on YouTube, and Tourism Queensland had a heap of fabulous publicity for the islands.

No other medium could have achieved results like that.

In total, the campaign garnered over £50m in earned media, putting the islands of the Great Barrier Reef firmly on the map as a must-see destination. Holiday blues are a real thing. Which is why millions of us book our summer holiday on the first day back at work after the Christmas break.

The folk at Richard Branson’s Virgin Holidays are all too aware of this phenomenon, which is why they teamed up with celebrity hypnotist Paul McKenna at the beginning of 2015, to run a series of ‘holiday hypnosis’ sessions at Bluewater Shopping Centre in Kent.

McKenna hypnotised willing participants for 20-minutes in a purpose-built hypno-pod, from which they emerged feeling like they had been on a relaxing two-week holiday.

The brand launched the stunt as part of its #FlauntIt campaign to counteract the January blues.

Why did this campaign work?

This PR campaign was simple, but brilliant. After all, nothing beats the feeling of an amazing holiday. Virgin tapped into it at prime booking time, leaving the brand top of mind for holiday-starved travellers. It also bagged Virgin coverage in the mainstream and trade press.

Find out more about this hypnotising travel industry PR campaign. In 2017, British Airways launched a heart-warming travel PR campaign, ‘BA Magic’. The initiative saw the airline carry out acts of kindness for passengers, to make their journeys even more special.

The airline asked the public to nominate family or friends to receive a bit of BA magic as they passed through the airport. Nominations came flooding in and BA arranged everything from marriage proposals and reuniting loved ones, to arranging money-can’t-buy experiences for terminally ill children.

One of the most emotional events was for Marjorie, a 13-year-old girl with Hodgkin Lymphoma disease. Her biggest wish was to be an air hostess. BA made her wish come true in the most spectacular way. Watch Marjorie’s BA story.

All the acts of kindness were captured on camera and posted on BA’s website. The tear-jerking videos have generated over six million views on social media.

Why did this PR campaign work?

The campaign was a roaring success on two fronts: It solidified British Airways’ reputation as a brand that goes the extra mile for customers. It also earned them loads of column inches in the industry press.

Emotional marketing is a powerful tool. It can increase your engagement tenfold. Find out how you can use it to your advantage in Hubspot’s ‘Ultimate Guide to Emotional Marketing’. 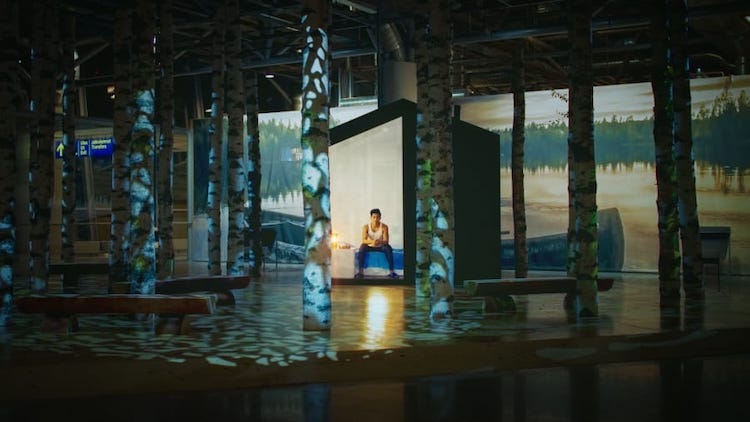 Whether it’s a delay, cancelled flight or missed connection, we’ve all been stuck in an airport for longer than we wanted. So, spare a thought for Ryan Zhu, a Chinese actor and influencer, who spent 30 days in Helsinki Airport, in October 2017.

Zhu lived in a cabin in Terminal 2 for a month, as part of a creative PR stunt by Helsinki Airport operator Finavia.

This creative travel PR campaign aimed to challenge the preconception that spending time in the airport is a ‘hellish’ experience. To prove it, Zhu experienced different aspects of airport life, from shopping, to dining, and reported back on his experiences. He was also given daily challenges to complete. On day one, he had to find his cabin within fifteen minutes. Day two involved buying five items in 30 minutes. And on day nineteen he left the airport to spend eight hours in Helsinki.

The challenges were posted on #LifeinHel website, in a series of short videos, and on all the usual social media channels.

Why this travel PR campaign worked

Zhu, a celebrity in his native China, gave the airport a glowing review, resulting in a ton of positive coverage and legions of new fans in the form of Zhu’s followers.

The campaign also gained traction in Europe, winning a Bronze Lion at the Cannes Lions International Festival of Creativity.

A survey carried out by Edelman in 2019 found that 63% of consumers trust what an influencer says about a brand over what a brand says about itself. If you team up with the right influencer, it can do wonders for your reputation and win you legions of new fans.

The Faroe Islands: Closed for Maintenance The Faroe Islands is a beautiful remote archipelago between Scotland and Iceland. Wild and rugged, it rains 300 days of the year and sheep outnumber residents.

In an effort to put the archipelago on the tourist map, the ‘Visit Faroe Islands’ tourist board came up with a cunning travel PR campaign.

In 2018, the Faroese Prime Minister launched a ‘closed for maintenance, open for voluntourism’ campaign, via a video statement. He announced that the archipelago would be closed to tourists over the weekend of 26-27 April 2019, with the exception of 100 volunteers, who would be given free food, lodging and transport, in return for helping with practical projects such as maintaining hiking pathways, creating signage, and improving facilities and access to beauty spots for visitors.

All people had to do was sign up and book their flights. 100 people were then picked at random to volunteer.

One day after the message went out, the story had received widespread media coverage and more than 1,000 people had signed up. By the closing date, over 6,000 people had applied.

Why this PR activity worked

As with the ‘Best Job in the World’, this PR campaign tapped into the scarcity principle. By limiting these once-in-a-lifetime opportunities to a select number of people, it made them more valuable to consumers.

By closing the country’s doors to all but 100 people, the Faroese tourist board prompted thousands of people to consider the Islands as a holiday destination and boosted their desire to visit.

It also captured the imagination of journalists, leading to coverage across Europe in the mainstream press. These top travel industry PR campaigns made headlines as they did something different. Here are a few simple things you can do to make your travel PR campaign stand out.

Give away free stuff

Who doesn’t love a freebie? Giving something away is a great hook for your travel PR campaign. Whether it’s an extra free night’s stay at a hotel, a complimentary spa treatment, or a free upgrade, a juicy promotion can incentivise travellers to choose your brand over others. Take Thai Airways for example. The airline showed its support of the Thai government’s efforts to combat COVID-19 by rewarding travellers who stayed at home.

To qualify, members with active frequent flyer membership could download a ‘Stay Home Miles Exchange’ app on their phone. The app used geolocation technology to determine their location. Users were given one mile for every four hours of staying at home during the campaign period.

If you really want to stand out, offer your customers an immersive experience. Marriott Hotels did this to great effect to promote some of its prime destinations.

Using Oculus Rift and 360-degree live-action video, the Marriott Teleporter enabled people to ‘visit’ Wai’anapanapa Black Sand Beach in Maui or take in the views from the top of Tower 42 in London. They could even feel the ocean breeze and the warmth of the sun, thanks to sophisticated 4D sensory technology.

As a result of the immersive stunt, Marriott bagged a load of coverage in the trade press and saw an increase in web traffic and bookings.

Innovate in times of crisis


Another way to distinguish your brand is to innovate in a time of crisis. This is what low-cost airline easyJet did, following the easing of travel restrictions during the COVID-19 crisis.

The brand teamed up with Irish artist Will Sliney to create lion and pilot-themed face coverings for young passengers, in order to reduce their anxiety around wearing masks on flights, one of the new requirements.

This simple ‘no-frills’ campaign won easyJet lots of coverage in the national press. It not only drew attention to the fact the airline was taking to the skies once again, but also highlighted the new safety measures for passengers and crew, while communicating its concern for its youngest passengers.

Get your travel business airborne With over 25 years in the PR industry, I’m well placed to help your business take-off with a first class travel PR campaign. I did it for serial entrepreneur Lee McAteer, who approached me to help him launch his Wrestling Travel business. The only one of its kind in the world, it’s a resource to help UK-based fans book wrestling trips to the US and beyond.

I crafted a newsworthy press release that caught the attention of the media, resulting in three media requests from the BBC alone. And also arranged exclusive press interviews with WWE legend Jeff Jarrett in exchange for mentions of Wrestling Travel in articles, and high-authority backlinks to the Wrestling Travel website from online coverage.

If you want me to help you get your travel business off the ground, or take it to new heights, get in touch to discuss your travel PR requirements.